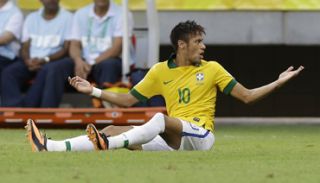 The striker has a reputation in his homeland for diving and he went down easily to win a free-kick, which he curled perfectly into the top corner in Saturday's match against Italy.

"Neymar can feign a foul and so we must be watchful that nobody is fooled by his ability," Lugano told reporters on Tuesday. "Neymar is very lightweight, he can drop to the ground and fool the referee and rivals.

"Brazil is a team that has abandoned the beautiful game, they hit hard and they are very tough physically.

"I have played here and it is perhaps the toughest football in Latin America and it is a tactical system they apply."

Wednesday's match at the Mineirao in Belo Horizonte match is one of South America's fiercest rivalries.

Although Brazil have held sway over their much smaller neighbours in recent years the most famous meeting between the teams was won by Uruguay, when they silenced a crowd of 200,000 at the Maracana and lifted the 1950 World Cup.

Brazil have won their three matches so far in the Confederations Cup while Uruguay beat Nigeria and Tahiti but lost to Spain and Lugano said they were favourites though his side would not fear them.

"I think Uruguay's history shows we have been able to fight great matches in difficult situations and we have been lucky to bring ourselves back to the place where we used to be over the last four or five competitions," Lugano said in reference to impressive performances in recent World Cups and Copas America.

"But we have the right to dream of beating Brazil tomorrow. We know it is very difficult and we know they are going through a good period and are playing at home.