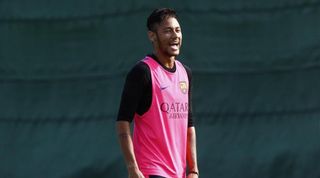 Brazil forward Neymar was rated as doubtful for the new boss' first league game in charge of Barca after suffering a sprained ankle in training on Thursday.

The former Santos man had only just returned to training after suffering a fractured vertebra during the World Cup, but Luis Enrique revealed that the mercurial 22-year-old trained on Saturday and could feature at Camp Nou on Sunday.

Winger Pedro's participation in the clash was also in doubt as he was suffering from gastroenteritis, but the Spain international could also line up against Fran Escriba's side.

"Neymar? We'll see tomorrow if he will play. Pedro? Same, he trained normally today. In principle, I count on both of them," Luis Enrique said at a press conference on Saturday.

Former Barca attacking midfielder Luis Enrique expects his side to play with flair and be the great entertainers in Spanish football this season, but sees champions Atletico Madrid as favourites despite the fact they have sold key players.

He said: "No team will beat us in excitement and motivation."

Luis Enrique added: "Atletico are the champions, so they are the favourites this season. Maximum respect."

The 44-year-old also hopes to see more new faces arrive at the club before the transfer window closes.

"We have done great signings so far, but we keep on monitoring the transfer market and can still strengthen the squad," he said.