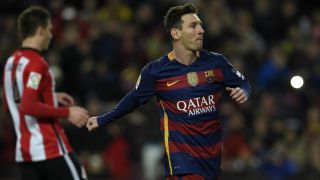 Luis Enrique says Lionel Messi was substituted as a precaution after reporting a problem during Barcelona's 6-0 thrashing of Athletic Bilbao on Sunday.

Messi opened the scoring from the penalty spot after just four minutes but was replaced by Arda Turan at half-time in the Liga game at Camp Nou, with some initial suggestions he was suffering from pain in his right hamstring.

Luis Enrique, who did not discuss the nature of the Ballon d'Or winner's complaint, announced the Argentina international will undergo tests on Monday and insisted he was simply keen not to take undue risks with his star forward.

"There'll be tests tomorrow. He has a slight overload," the Barcelona coach told the media.

"There's no sense in taking a risk. I don't like to risk anybody, imagine doing so with Messi."

Athletic had goalkeeper Gorka Iraizoz sent off for bringing down Luis Suarez in the opening exchanges, which allowed Messi to hand Barca the advantage early on.

Suarez went on to score a hat-trick, with Neymar and Ivan Rakitic also finding the net in what proved to be a comfortable win for the Liga champions.

Luis Enrique said it seemed a harsh - though fair - decision to dismiss Iraizoz but he does not believe the result will have any impact on Wednesday's Copa del Rey meeting at San Mames.

"When it's in your favour it's great, but when it's against you it's a word that starts with 'pu' and ends in 'on'," he said.

"A penalty is already a very big punishment. There's a rule and you have to apply it. I think sending off the goalkeeper is an excessive punishment.

"It will be a different competition on Wednesday and nothing to do with what we've seen. We'll try to do things well but we're not going to win the game without thinking that there's a second leg.

"I've never had a simple game against Athletic at San Mames. If it was difficult for us to play against 10 men, imagine it against 11."