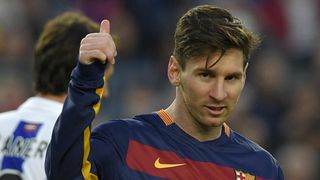 Luis Enrique says newly-crowned Ballon d'Or winner Lionel Messi would be decisive even if he played at centre-back for Barcelona.

The Argentina international collected the individual accolade for the fifth time in Zurich on Monday, beating Cristiano Ronaldo and team-mate Neymar after a stellar year for club and country.

Messi's past wins, particularly in 2011 and 2012, came as a result of his exceptional form while playing in a false nine position, while the 28-year-old shone in Barca's treble-winning campaign last term from a wider role.

And Luis Enrique, who has praised Messi's versatility in the past, does not believe his influence would change where he to play in any position on the pitch.

"I'm very happy. He's being recognised as the greatest player of all time and we're so lucky to have players like Neymar in these ceremonies as well," he said on Tuesday.

"I think there are other players in my squad who deserve to be up there so I'm glad these players have such a strong future ahead of them.

"Whatever position he plays, he'll add to the team, as a goalscorer and providing assists. If you played him as a midfielder, a centre-back, he'd still be decisive.

"I think there were lots of players to help us have that incredible year and they also deserve these prizes but not everyone can win. It's down to the voters.

"It's all about winning titles as a club and the players know this is more important than any individual accolades.

Luis Enrique did not attend Monday's event in Zurich to collect his award for the best coach of 2015, but the former Celta Vigo boss maintains he was delighted to be the recipient.

"It's an honour which has come as a reward for everything the players and staff did last year. I'm very grateful to those who voted," he said.

Turning to Wednesday's Copa del Rey round of 16 second leg against Espanyol, Luis Enrique does not believe the performance of his side will be affected by the controversy of the first leg, in which two Espanyol players were sent off and striker Luis Suarez was issued a suspension for provoking his opponents after the final whistle.

"I've spoken to my players but nothing happened the other day that can't happen again, I've seen this kind of game many times in the past.

"I don't think it's affected the way my players are going to perform, they're all used to playing high-tension games like this. They have to keep calm and focus on what will happen on the pitch."