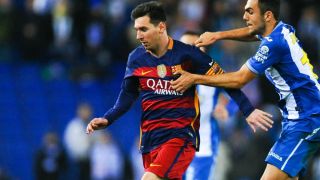 Munir was on target twice, with Messi having a hand in both goals as Barca cruised into the quarter-finals 6-1 on aggregate.

Despite the emphatic 4-1 win recorded in a first leg that saw two Espanyol players sent off, Messi played the full 90 minutes at Cornella-El Prat on Wednesday.

And Luis Enrique believes the extra playing time can only be beneficial for Messi - who returned from a knee injury in November and missed the FIFA Club World Cup semi-final last month due to a renal colic.

"He's doing great," Luis Enrique said of Messi - who was awarded the Ballon d'Or for the fifth time on Monday. "He has rested a lot already with his injury. The more minutes you accumulate, the better."

On Munir, he added: "He did well. He's young, has qualities and I'm delighted for him."

Asked about his side's overall performance, Luis Enrique said: "We started hesitant and indecisive, but after 15 minutes the game was ours.

"We suffered a bit, but we are satisfied."