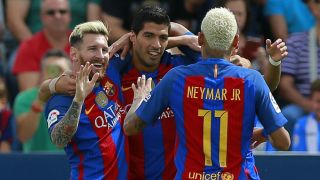 Barcelona head coach Luis Enrique is thrilled to be able to play Lionel Messi, Luis Suarez and Neymar in the starting line-up against Manchester City.

The fearsome 'MSN' attacking trident has not started a match together since the 1-1 draw with Atletico Madrid on September 21, when Messi sustained a groin injury.

The Argentina star returned to action in the 4-0 LaLiga win over Deportivo La Coruna on Saturday and marked his comeback with his side's fourth goal, following an assist from Neymar.

And Luis Enrique is delighted to be able to call on all three forwards for the Champions League clash against Pep Guardiola's Premier League leaders on Wednesday.

"It's great news to have all our players back," he said. "It's always amazing to have Messi.

"Having Leo play on the wing or in the middle is positive. The more involved he is, the better, but then you have to have counter-movements in order to plug the gaps.

"We always visualise the best scenario possible. I want and I hope that we enjoy ourselves. In order to beat City, we need the best version of every player."

Barca announced on Tuesday that Neymar will sign his new contract on Friday, bringing an end to speculation over the Brazil international's future.

With Javier Mascherano and Sergio Busquets having also committed to new deals, Luis Enrique believes the morale of the squad can only improve.

"It's good news. First we had Busquets, then Mascherano and now him," he said. "It's great for everyone that the players are still happy."