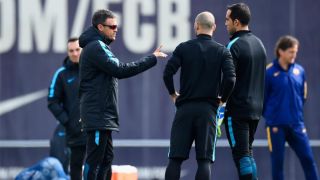 Barcelona boss Luis Enrique refused to be drawn into the "rumours game" when pressed on the future of goalkeeper Claudio Bravo.

The Chile international has been heavily linked with a £17.5million move to join Pep Guardiola at Manchester City, who left out regular number one Joe Hart for the Premier League win over Sunderland on Saturday.

Javier Mascherano said the Barca squad were unsure over whether Bravo would stay at Camp Nou, just two years on from his transfer from Real Sociedad.

But Luis Enrique would not give any clear indications over the 33-year-old's future during something of a terse media conference ahead of Barca's Supercopa de Espana second leg against Sevilla.

"There are so many hypotheses and conditions. I'm interested in the final," he said. "I know there are so many rumours in the mill and you like to play that game, but I don't."

When asked again if Bravo is going to City, he replied: "Good question. It's the same answer to the first question: I'm concentrating on the Supercopa."

Luis Enrique also denied that any player has approached him to request more playing time and dismissed the suggestion that keeping Bravo, Marc-Andre ter Stegen and Jordi Masip happy in training was difficult.

"I like three goalkeepers in the first team. There is no secret formula. You just have to assess how things are in the squad.

"It's very easy [to deal with the situation]. I tell them not to bump their heads on the posts or the crossbar. The rest is up to them.

"I think I've given more than enough answers. You can pick your quotes from what I've said already."

While Luis Enrique would not discuss Alcacer or Sergi Samper, who has been touted as a possible makeweight in any deal, he does expect further activity in the market before August 31.

"I won't talk about any specific players who aren't at Barca," he added. "It would be boring for you. I think some players will come in and some will go."