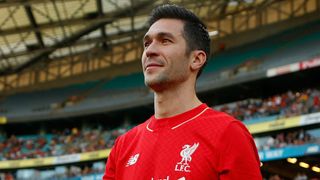 Garcia had reportedly retired in 2014 when he left Atletico Kolkata but after appearing in a Liverpool legends match against a Socceroo legends team, the 37-year-old has extended his stay in the country by signing with the Gosford-based club.

The club announced his signing at half-time of their league game against Adelaide United with an announcement on their official site.

The Mariners will be desperate for a big impact from the former Spain international, who have won just two out of 14 games.

"I am delighted to be joining a club like the Central Coast Mariners. This is an exciting challenge for me to play in the Hyundai A-League and with such a progressive club like the Mariners,” Garcia told the club's website.

"I am really looking forward to being on the Coast, meeting my fellow players, meeting the fans and to entertain them with my style of play.

"One of the things that attracted me to the Club was the opportunity to share my experience with a young playing group. I am also looking forward to playing football in one of the most beautiful places in the world."

Garcia is expected to play his first match for the Mariners next Saturday when the Western Sydney Wanderers visit Gosford.