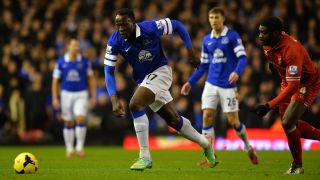 The on-loan Chelsea striker left Anfield on Tuesday with his foot in a cast after being withdrawn just 25 minutes into the Merseyside derby, which Liverpool won 4-0.

Initial reports suggested that the 20-year-old had damaged ankle ligaments and Everton fans feared the worst a matter of days after left-back Bryan Oviedo suffered a double leg break.

However, Martinez has delivered a positive update on Lukaku's injury.

"There is no ligament damage and the injury is not as bad as we first thought," Martinez told the club's official website.

"It will be a case of weeks rather than months."

The loss of Lukaku – who has scored nine goals in 19 Premier League appearances since moving to Goodison Park in September – is an undoubted blow to Everton's top-four hopes, which were seriously undermined by Liverpool.

Lukaku is Everton's top scorer, although he has failed to find the net in his last six games in all competitions.