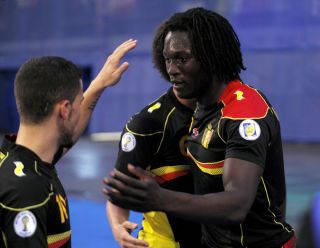 The Chelsea striker, on loan at Everton, struck twice in the first half as Marc Wilmots' team secured top spot in Group A and a place at their first FIFA World Cup finals since 2002.

With Christian Benteke out injured, Lukaku was given a starting role for Belgium and he repaid the faith shown in him by Wilmots with an impressive performance.

The 20-year-old had too much quality for the Croatia defence to handle as he first outpaced his markers to open the scoring before showing his strength to hold off a challenge when doubling his tally.

Niko Kranjcar volleyed a late consolation, but it was Lukaku's brace that made the difference, although the striker opted to pay tribute to his team-mates rather than taking all the credit himself.

"I'm not the match winner, the team makes a difference. We played well," he told Belgian newspaper Het Nieuwsblad. "The players I can finally express our stamp on the team, Lukaku is proud.

"The last quarter we were difficult (to break down), but two years ago we could still lose here after the 1-2. Now we have shown that we have a winning mentality.

"On Tuesday we play at home in the last match (against Wales), but it is certainly not a gala match.

"We will do everything to win."

Wilmots echoed Lukaku's sentiments and insisted the celebrations would be put on hold until after their clash with Wales on Tuesday.

"We are happy but we are not partying," the coach said. "We have had a moment in the locker room, for euphoria is still too early.

"Tuesday we have another game and I hope we also tackle seriously.