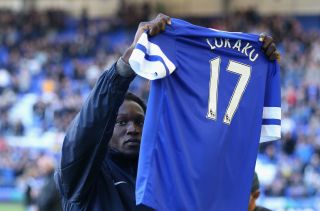 The Belgium international striker moved to Goodison Park on a season-long loan on transfer deadline day after being allowed to leave Chelsea to gain more valuable first-team experience.

Lukaku was a fans' favourite during a loan stint at West Brom last term as he scored 17 Premier League goals for Steve Clarke's side.

And the 20-year-old is relishing the opportunity to further his footballing development at Everton under Roberto Martinez and believes he can improve on his 2012-13 performances.

Speaking to Everton TV, he said: "Still I can improve and that's why I came here - because it's a big club and a team who play at the top of the league.

"For me, it's the next step I need, so I have to settle in as quickly as I can and set better standards than I did last year.

"I will work for it and you have to be confident in your abilities, because you always have to improve."

The former Anderlecht forward admits he has set himself a target in terms of goals for the season, but refused to reveal a specific number.

"As a striker you have to keep yourself to your  task and that's scoring goals, but my target is personal," he added. "Hopefully it will go right this season but you have to think for the team as well.

"I'm here to help and hopefully it will be with a lot of goals too."