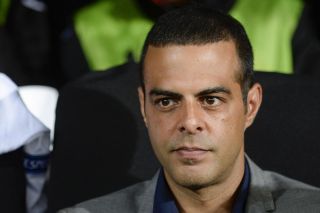 The Championship side have moved quickly to replace former boss Bob Peeters who was sacked on Sunday following a nine-match winless run.

Luzon, who has signed a deal until the end of next season, was previously in charge at Standard Liege and has also coached the likes of Hapoel Tel Aviv and Maccabi Petah Tikva in his native Israel.

"I am happy to have joined Charlton and will work as hard as I can to try and make the club successful," the 39-year-old told Charlton's official website.

"We have talented players in the squad and it is my job to try and bring the best out of them.

"It is important to have a positive spirit in the team and I want to ensure the entire group is fighting together for the good of the club.

"I look forward to taking training for the first time and getting my ideas across to the players."

The London club started life under Peeters well and did not lose any of their opening 11 Championship matches, but they quickly fell off the place and now sit 14th in the table with 31 points from 25 matches.

Luzon's first match in charge will come at Watford on Saturday.