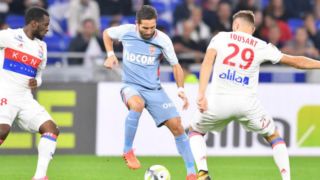 Nabil Fekir scored a dramatic stoppage-time winner as Ligue 1 champions Monaco were beaten 3-2 by Lyon in a pulsating encounter.

Lyon clinched an unbelievable victory in the fifth minute of added time when Fekir capped a fine individual performance by netting a 25-yard free-kick.

The home captain ended Friday's thrilling match with two goals and an assist, as his late winner handed Monaco's hopes of defending their title another significant early blow.

Prior to the late drama, it looked like as if all the scoring had been done in the first half at Parc OL.

Mariano Diaz broke the deadlock by netting for a third consecutive league game after the hosts had twice hit the post early on.

Rony Lopes hit back for Monaco, who were playing without Radamel Falcao after his exploits for Colombia in the international break, but Fekir put Lyon back in front.

Monaco responded again, though, with Adama Traore marking his first appearance of the season in style with a wonderful strike.

Both sides had chances to win it in the second half, but just as it looked like they would have to be happy with a draw ahead of their respective European commitments next week, Fekir settled the match with his seventh top-flight goal of the season.

The devastating defeat means Monaco are without a win in three across all competitions and stay three points behind leaders Paris Saint-Germain, who have the chance to extend their lead to six away against Dijon on Saturday.

Bruno Genesio's men, meanwhile, jump up to third in the table after earning their first win in six matches.

Lyon went close early when Fekir swung in a corner from which Lucas Tousart sent a free header from six yards against the post.

The hosts struck the woodwork again a few moments later, with Monaco goalkeeper Danijel Subasic far too casual in goal dealing with Kamil Glik's back-pass, allowing Mariano to charge him down and deflect the ball against the post.

The breakthrough was coming and it arrived in the 11th minute when Fekir twisted and turned down the left and delivered a cross to Mariano, who produced a first-time finish from inside the six yard box.

But Monaco responded impressively inside six minutes, Keita Balde's turn and throughball releasing Lopes to race into the penalty area and calmly place his finish inside the near post.

It only took another six minutes for Lyon to re-take the lead at the other end, a neat passing move ending with Ferland Mendy finding Fekir with a low pass from the left and the home captain beating Subasic with a low left-footed effort from 12 yards.

Lyon had a penalty claim turned down when Mariano fired an effort against arm of Glik and that decision proved decisive when Traore produced magnificent moment on 34 minutes, collecting a low pass from Lopes and thundering a right-footed effort into the top corner from 20 yards.

Monaco almost took their first lead of the match early in the second half when only a vital block from Mouctar Diakhaby denied Keita from close range after keeper Anthony Lopes had flapped at a cross and saved an initial attempt from Thomas Lemar.

After being second best in the first half, the visitors were better in the second and spurned a glorious chance to score when Traore somehow missed the target with only Lopes to beat, Terence Kongolo having set him up.

But Lyon had chances too, Subasic making a key save with his legs to deny Mariano from a presentable opportunity.

The former Real Madrid striker then blasted a 30-yard free-kick off the post, his second time – and Lyon's third – hitting the woodwork.

It looked like the closest either side would come to fashioning a late winner was when Fekir had a goal ruled out for a close offside call in the last minute.

But Fekir and Lyon were not to be denied, the 24-year-old curling into the bottom corner after winning the free-kick himself from Monaco substitute Guido Carrillo, ahead of the two teams' key continental dates with Everton and Besiktas respectively.