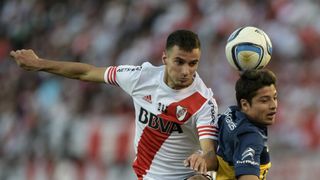 Lyon have secured the services of promising defender Emanuel Mammana from River Plate for €7.5 million.

The 20-year-old has signed a five-year deal with the Ligue 1 outfit.

Mammana had also been linked with Chelsea in recent months, but has made the decision to continue his career with Lyon instead.

"I am very proud to have signed for a big club like Lyon," the defender told OLTV.

"I will do everything within my powers to reward the club for the faith shown in me. I have arrived at a big club to learn and to win titles."

Mammana came through the ranks of the River Plate youth academy and made his official first-team debut in October 2014. The centre-back had already made his Argentina debut by then, featuring in the friendly win over Slovenia in June of the same year.

He becomes Lyon's third new arrival ahead of the 2016-17 campaign following the previous capture of Maciej Rybus and Nicolas N'Koulou.