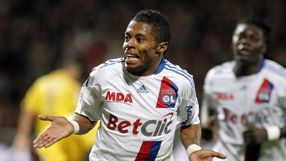 With only eight points between surprise leaders Brest and second from bottom club RC Lens, 11th-placed Lyon are just five points off the pace despite losing four of their 12 games.

"This league in which no team is dominating is good for us," Lyon and France keeper Lloris told reporters.

"Otherwise, we would have already lost hope of winning the title. But in this situation, everything is still possible."

Victory could even propel Lyon, who won the French league seven consecutive years from 2002, up to third in the standings. They may get a further boost if striker Lisandro Lopez returns from an injury-lay-off.

Third-placed Paris Saint-Germain, who revived their title hopes with a 2-1 win over champions Olympique Marseille last weekend, will hope strikers Guillaume Hoarau and Mevlut Erding will once again be on target when they visit Lorient on Sunday.

After a lacklustre few weeks that had shaken their confidence, Erding and Hoarau fired a goal each against Marseille.

"I have always trusted our two strikers despite what everyone said", PSG coach Antoine Kombouare said.

"They were not scoring but they were doing a lot of defensive work. They have been rewarded for their hard work and perseverance. I am happy for them. Of course, now they will have more confidence and they need to show that on the pitch."

Marseille on the other hand need to show more maturity, according to coach Didier Deschamps.

The defeat by PSG proved costly as it prevented them from climbing to the top of the standings. It also ended an eight-match unbeaten league run and they dropped to fourth place with 18 points.

"We were having a promising run that stalled with this defeat," Deschamps said. "We need to gain more maturity and experience.

"We are all in a peloton... nobody is above the other. Let's hope we can stay in the pack and even try to escape from it."

On Saturday they host RC Lens and still have a game in hand to play against second-placed Rennes, who travel to Auxerre on Sunday.

"The media will now stop to write the same things again and again about us," Licka told the club's website. "We will be more relaxed."