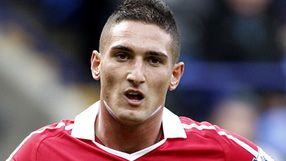 England forward Rooney, criticised in the past for swearing and spitting, was electric last season but struggled at the World Cup and has been in poor form this term while allegations about his private life have filled the tabloids.

"Rooney is a really great person, he always gives me advice, but he's a bit working class and vulgar," Macheda told Thursday's Gazzetta dello Sport while in Italy with the Under-21 team.

Roman Macheda, who himself hails from the inner city like Liverpool-born Rooney, is happy learning from the striker at United and dismissed speculation he might join former side Lazio on loan to gain more first team opportunities.

"I want to improve in Manchester, when I'm more mature I'll be able to make choices. The rumours about Lazio please me but I don't think I will go," the 19-year-old said.

Macheda, who burst onto the scene with a last minute winner on his Old Trafford debut at the age of 17, has made five appearances for the Red Devils so far this season.

However, Italy Under-21 goalkeeper Vito Mannone is getting itchy feet in England after failing to break through again at Arsenal this season despite Manuel Almunia and Lukasz Fabianski struggling at times.

"It hurts to not play especially when the other two are not doing great," Mannone said.

"I'll see, here the situation at Arsenal is not normal, I'd do six months on loan to play. AC Milan has been a dream since I was a kid."