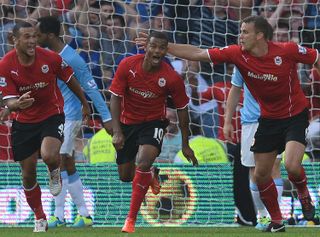 Mackay's men came from behind to secure their first ever Premier League win, as Fraizer Campbell's double and an Aron Gunnarsson strike helped them claim a shock victory.

Edin Dzeko had earlier fired City ahead with a stunning 25-yard strike, but three goals in less than 30 second-half minutes set Cardiff on their way.

And although Alvaro Negredo scored a late goal to set up a nervy finish, Cardiff held on for an excellent victory.

Mackay told Sky Sports: "The set of players in there, they were fantastic to a man, disciplined and did their job.

"I thought tactically the players did an incredible job today and deservedly won the game. When we got the ball back we showed our own ability.

"We had a fantastic crowd here. We knew it was going to be tough but I thought there was a lot of belief in their ability (from my players) today."

Both of Campbell's goals were headed in from corners, with Manchester City's slack marking exposed by the former Manchester United and Sunderland striker.

With Manchester City captain Vincent Kompany sidelined with a groin injury, midfielder Javi Garcia filled in, and Mackay thought Campbell ran him ragged during the course of the match.

"I think he gave Javi Garcia a very tough time during the game," he said.

"We've worked hard on our set-pieces. We had good movement and fantastic crosses coming in and that is something that is difficult to defend for anyone."

Cardiff hero Campbell – who joined from Sunderland in January – praised the quality of the corners delivered by Peter Whittingham, while he also admitted that Garcia's inclusion at centre-back encouraged him before the game.

"(There were) some great deliveries into the box today," he said. "It was a great all-round team performance.

"It was very special (to score) but the most special thing was getting the three points.

"They had a central midfielder playing centre-back so you are going to get a bit of an opportunity there. We knew we would get chances."