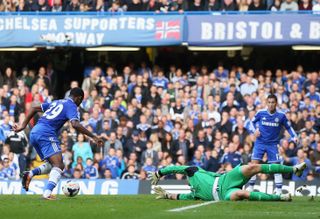 The Welsh outfit ultimately went on to lose 4-1 in a highly charged Premier League clash at Stamford Bridge, having led after 10 minutes thanks to a well-taken Jordon Mutch goal.

But Mackay was left to rue the game's turning point, which saw Chelsea claimed their leveller in debatable circumstances.

Samuel Eto'o stole possession from Cardiff goalkeeper David Marshall 12 minutes before half-time as he bounced the ball while preparing to clear, with the Chelsea striker in turn finding Eden Hazard in the area to score.

That goal sparked the hosts' comeback, as after the break Eto'o himself scored before Oscar and Hazard's second wrapped up the points.

Mackay, though, insisted that referee Taylor had made an error in failing to stop play.

"He (Marshall) knows the rule, he's allowed to bounce the ball, and he bounced it, and Eto'o obviously toes it away on the bounce," said the Cardiff boss.

"If he touches it then the linesman and referee obviously think that the ball is in his control and he's allowed to bounce it, then that is immediately a foul.

"We were 1-0 up and (Petr) Cech makes a magnificent save in the top corner from (Peter) Odemwingie’s header to go 2-0 up, and while a top team like Chelsea had a lot of possession against us, there wasn't a lot of pressure on our goalkeeper at that point.

"It was 10 minutes before half-time and that makes a huge difference in the slant of what team-talks can sometimes say, so that obviously is a large factor.

"We were obviously beaten by four but I don’t make any apologies for being beaten by four rather than two, because at 2-1 we had to go and try and press and get back into the game."