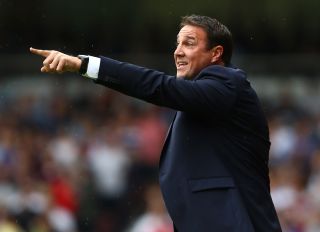 The Premier League new boys found themselves on the end of a 2-0 defeat to West Ham in their season opener on Saturday, and Mackay knows work still needs to be done to enable the team can compete in the top flight.

Mackay has made four new signings during the close-season, but after missing out on Etienne Capoue to Tottenham, acknowledges his search for new recruits continues.

"We're certainly trying but so is everyone in the Premier League," he said. "We're trying to get good players but sometimes it's not always within your control.

"If I find a good player and everything comes together in terms of the club agreeing and the player agreeing then I'll absolutely try to act."

One of Cardiff's new arrivals is Andreas Cornelius. The striker was not available for the West Ham clash as he recovers from an ankle injury, but Mackay is positive the 20-year-old will soon be back in training.

"He (Cornelius) joined in (training on Friday) but wasn't quite match fit," the Scot added. "He was nearly ready but he should be back training next week."