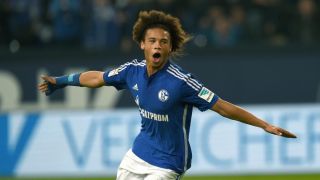 Sane, 20, is expected to leave Gelsenkirchen over the next month with reports in Germany last week suggesting he had already agreed terms on a four-year deal with Pep Guardiola's City.

But Souleymane Sane says there are other clubs still interested in signing his son.

Leroy Sane scored nine goals in 42 games in all competitions for Schalke last season, earning a first call-up to the full Germany squad in November.