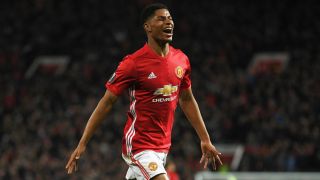 Manchester United take on Ajax in the Europa League final on Wednesday in the culmination of a gruelling campaign to win the competition.

The stakes are high for Jose Mourinho's side, who need a victory if they are to secure a place in next season's Champions League, having only finished sixth in the Premier League.

United have already played 14 matches to reach this stage of the tournament, where they take on an entertaining Ajax side.

Here, we look at their road to the final.

United were drawn in Group A alongside Feyenoord, Fenerbahce and Zorya.

They got off to a shaky start, losing their opening match 1-0 to Feyenoord, who would go on to be crowned Dutch champions, Tonny Vilhena's late winner punishing Mourinho, who had made eight changes to his team.

United got their campaign back on track as Zlatan Ibrahimovic's header saw off Zorya 1-0 at Old Trafford, before Fenerbahce were thrashed 4-1 at the same venue, Paul Pogba's impressive double proving decisive with Robin van Persie scoring the visitors' consolation against his former club.

But another away loss, this time a 2-1 reverse to Fener which featured a sensational Moussa Sow overhead kick, meant United's fate was uncertain going into their final two games.

United, though, defeated Feyenoord 4-0 in a key clash at Old Trafford – a match that saw Wayne Rooney become their record European goalscorer.

I was delighted to play tonight in front of our incredible fans! Super happy for the win! November 24, 2016

They finished the job by winning away for the first time in the tournament, a 2-0 triumph against Zorya coming courtesy of a superb solo goal from Henrikh Mkhitaryan and a strike from Ibrahimovic, ensuring United finished second on 12 points.

The build-up to United's round-of-32 tie against Saint-Etienne was dominated by talk of Pogba coming up against his brother Florentin, who plays for the Ligue 1 side.

But it was Ibrahimovic who stole the show, his first-leg hat-trick at Old Trafford giving United a commanding 3-0 aggregate lead.

Mourinho's men avoided any drama in the second leg, with Mkhitaryan's away goal killing off the tie, but the rounds to follow would not prove to be as comfortable.

PIC: The moment Mkhitaryan put us ahead before being withdrawn due to injury. February 22, 2017

Mkhitaryan struck again for United in their last-16 tie against Rostov, but an equaliser from Aleksandr Bukharov left the tie hanging in the balance going into the return leg at Old Trafford.

United did not produce a vintage performance back in England and squandered multiple opportunities to score.

However, Juan Mata netted from close range with 20 minutes remaining and Sergio Romero made a key late save from Bukharov's header to seal a last-eight spot.

United were tested even more in the quarter-final against Anderlecht, even though Mkhitaryan put them ahead in Belgium, scoring for the fourth consecutive Europa League away game.

Leander Dendoncker netted a late equaliser against the run of play to peg back United and ensure the tie was level at 1-1 and Anderlecht were then much improved in the second leg to give Mourinho a nervous night at Old Trafford.

An entertaining match saw the rampant Mkhitaryan net after 10 minutes, only for the visitors' captain Sofiane Hanni to hit back before the break.

United dominated in the second half, but Jesse Lingard, Marcus Rashford, Pogba and Ibrahimovic all squandered chances to score as the tie moved into extra time.

But Rashford scored a dramatic winner after 107 minutes with an impressive finish to keep his side's bid for glory alive.

The win came at a cost, though, Ibrahimovic and Marcos Rojo suffering injuries that would keep them out for the rest of the season.

Rashford scored an impressive free-kick to fool Celta Vigo goalkeeper Sergio Alvarez and give United a 1-0 victory at Balaidos to gain the upper hand in their Europa League semi-final tie.

That made them hot favourites to reach Stockholm going into the return at Old Trafford, but a tense match went down to the wire.

Marouane Fellaini turned in Rashford's cross to strengthen United's position, but could not put the result beyond doubt and Facundo Roncaglia levelled on the night five minutes from time.

Eric Bailly and Roncaglia were both sent off for pushes that sparked a mass brawl as both sides ended the match with 10 men.

And United almost crashed out at the death, only to be reprieved when John Guidetti failed to convert Claudio Beauvue's square pass from just outside the six-yard box in a golden opportunity for the visitors.

With a place in the final secured, Mourinho began resting players in the Premier League, making Europa League success his top priority.