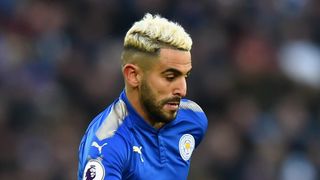 Leicester City manager Claude Puel believes Riyad Mahrez is happy at the club and rejected claims the winger will seek a move away in the January transfer window.

Mahrez went public with his desire to leave Leicester last May, handing in a transfer request, and was linked with Roma, Manchester United, Barcelona and Arsenal.

The 26-year-old left an Algeria training camp to complete a deadline-day move in August only for the transfer to collapse, but has scored seven Premier League goals this season with the Foxes rejuvenated under Puel.

And the Frenchman rejected speculation Mahrez has again requested to leave Leicester, praising the recent contribution of the winger, who scored a brilliant goal in Monday's win against Huddersfield Town.

"I want to keep all my best players and Riyad is an important player in the team for us," Puel told reporters on Thursday. "When I discussed things with him, he had a good attitude and is enjoying his football.

"He is a happy player and likes to play with his team-mates. His statistics have improved, with assists and scoring. Of course, I want him to continue all this good work.

"He is happy with the squad, it is speculation but for me it is no problem. He is happy to play with this team, he enjoys his football and this is the most important thing."

CP: “Fleetwood will play with quality and a physical mentality. We need to play with our Leicester qualities and a good intensity.”January 4, 2018

Leicester travel to Fleetwood Town for an FA Cup third round tie on Saturday, but Jamie Vardy is an injury doubt for the game against his former club, although Adrien Silva could feature after making his debut against Huddersfield.

"We will see. If [Vardy] cannot be 100 per cent, we will not risk him," Puel said. "He is not training with the team. He is just doing some exercises in the gym. For the moment, it is not good for him.

"For [Danny] Simpson, I don't know when he can come back into competition. For now, he is in the gym. Wes [Morgan], I think it is not too bad, but I think he will be out for a few weeks.

"[We may make] some changes but that is normal. Now we will see all the players, like Silva and [Matty] James, if they need some game time to have a good tempo to their play. It is a good opportunity for them to make progress in their fitness. We will pick a team to win the game, of course."