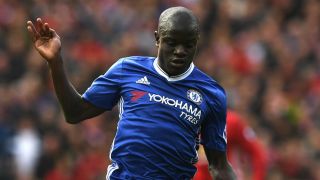 Kante joined Chelsea from Leicester City at the start of the season and has quickly become an integral figure at the Premier League champions.

The 28-year-old's consistently impressive performances in the holding midfield role have drawn comparisons to the iconic Makelele, a two-time Premier League champion with the Blues.

Kante was named PFA and FWA Player of the Year as a result and the former Real Madrid man only expects his fellow Frenchman to get better next season.

"People talk about the Makelele position, but I am old and it is time everybody called it the Kante position. N'Golo deserves that," Makelele was quoted as saying on the official Chelsea website.

"Every time I watch N'Golo, I see so much desire in him, so much focus and so much determination to make himself a better player with every game.

"He was the heartbeat of the Leicester team, but it was also like taking a bulldog for a walk, you had to keep pulling him back because he had so much energy.

"Now N'Golo has added intelligence. He appreciates the position of his team-mates more and how to play in a more sophisticated system where it is not all about running and tackling, but the decisions he makes.

"Some players are meant to be superstars, but some - like N'Golo and myself - must be happy making other people look good.

"Next season we will see him become even better because he will have the challenge of the Champions League. He is also part of a fantastic generation of young players coming through for France, which will also see him develop."