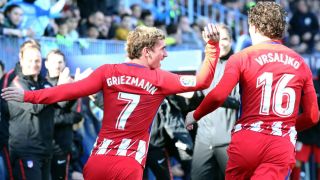 Antoine Griezmann should be firmly back in the good graces of Atletico Madrid fans after he fired them to within six points of LaLiga leaders Barcelona with a 1-0 win over bottom club Malaga.

Griezmann had been jeered by Atletico fans for slowing play down instead of looking for another goal towards the end of their 1-0 win over Valencia last time out.

He reacted angrily to those jeers, but both he and the Atletico supporters had reason to celebrate less than a minute into Saturday's contest at La Rosaleda.

Griezmann opened the scoring with a confident close-range finish, his fourth goal in five games, and it proved to be enough for Atletico to at least temporarily gain ground on title favourites Barca.

Malaga, who are seven points adrift of safety, had much the better of the second half but could not find an equaliser, with Atletico goalkeeper Jan Oblak rarely called into action.

Barca will be expected to stretch their advantage back to nine points against Getafe on Sunday, but it is now three wins in a row for Diego Simeone's men, who head into the first leg of Thursday's Europa League tie with Copenhagen with momentum.

. celebrated by holding up a shirt commemorating Atleti fan Nacho Barbera who died playing for in an U12s game last weekend. February 10, 2018

Griezmann needed only 38 seconds to break the deadlock as he coolly lofted the ball over Roberto Jimenez at the near post after Saul's effort from outside the box had deflected into his path.

The France international celebrated by running to the sideline and holding up an Atletico jersey adorned with the name of Nacho Barbera, a child who recently died following a cardiac arrest in a youth match.

Diego Costa sent an ambitious volley well wide as Atletico pushed for a second, but they were almost pegged back as Brown Ideye headed into the side-netting from Roberto Rosales' free-kick.

Costa was unable to find the target with a header from a corner as Roberto was caught in two minds as to whether to come and collect.

Malaga made an excellent start to the second half and Atletico were grateful to Oblak for preserving their lead as he sprung to his right to turn Rosales' excellent free-kick over.

That was as good as it got for Malaga, who were forced to finish the game with 10 men as substitute Mehdi Lacen was taken off on a stretcher with a head injury.

Atletico held firm with little difficulty, leaving them now looking for a Barca slip-up to make a turnaround in the title race more likely.

- Simeone has reached 150 wins in LaLiga as Atletico manager.
- Atletico have the most LaLiga wins (10) by a single goal this season and are the second side to concede only nine goals after 23 games (alongside Deportivo on 1993-94).
- For the first time ever, Malaga have failed to score at home in five LaLiga games in a row.
- Indeed, Malaga have failed to score the most times in LaLiga this season (16), while Atletico have recorded the most clean sheets (15).