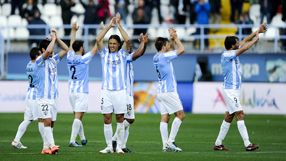 Owner Sheikh Abdullah Bin Nassar Al Thani invested heavily in players and coaching staff after buying the modest Andalusian club in 2010, helping them qualify for the Champions League for the first time with a fourth-placed finish in La Liga last season.

But speculation that Al Thani was preparing to bail out - rumours that initially went unanswered - coupled with delays in wage payments and the sale of players including Santi Cazorla and Salomon Rondon, projected an image of a club in deep crisis.

In an interview at the club's Rosaleda stadium before Saturday's 4-0 win at home to Real Betis, Casado admitted it had taken too long to quosh the sale rumours.

Malaga were now on track with a restructuring that will make the club financially viable while achieving the goal of becoming a front-rank team in both Spain and Europe, he said.

"Maybe there was a little too much of a delay but there was a reaction," Paris-born Casado, who previously worked for the Madrid Masters tennis tournament and the Spanish football federation (RFEF), told Reuters.

"From outside the crisis looked much greater than what we were experiencing," added the 40-year-old Spaniard, a sports marketing expert and a fluent French speaker.

"The club was not for sale. We were listening to investors, as we must listen, but there was no attempt made to sell.

"We are demonstrating that we have a solid base but there is much still to do in terms of ensuring the club's viability."

The club's silence was eventually broken at the beginning of August when they published a brief statement saying Malaga had begun the process of adapting to UEFA's financial fair play (FFP) rules, designed to make clubs live within their means.

Executive vice president Moayat Shatat held a news conference a month later at which he said Al Thani had no intention of selling and would continue to invest, the first official denial that a sale was imminent.

The crisis appeared to have been averted and fans' fears were further allayed by the performances of the team under Chilean coach Manuel Pellegrini.

They successfully negotiated a Champions League playoff against Panathinaikos, thumped Zenit St Petersburg 3-0 in their opening Group C match and have begun their La Liga campaign with four wins and two draws to climb to third.

"I believe that the crisis did not affect us on the pitch but instead united us, thanks to our coach who has done some great work," Casado said.

The extent of the club's financial problems was highlighted this month when Malaga was among 23 teams to have prize money withheld as European football's governing body UEFA revealed the first sanctions under its FFP rules.

Casado said the restructuring plan now underway was designed to ensure the club complied with the regulations and any future investment would be "targeted and controlled".