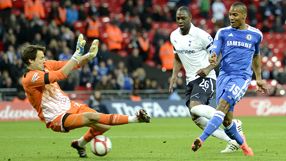 Chelsea will play their final four matches with the two biggest games of their season in the back of their minds: the FA Cup final against Liverpool and the Champions League final against Bayern in Munich.

The Frenchman told Chelsea’s official website: "We are happy to be in the two finals but the best way to prepare is to keep the confidence and win other games coming up.

"We have to win our big games now, we must win every league game to be in the top four."

Chelsea still have a chance of reaching the top four through league positioning, being only four points off the current fourth-place occupants, Newcastle United.

Malouda insisted that everyone is up for the challenge of reaching the top four and are hungry to win the two finals ahead of them.

"Everybody is fit and ready to do it, we have the quality of course, the ability to win games and be solid, so it's our mission to win every game in the league and prepare to play Champions League football against next season.

"We are not happy just to be in the finals, we are looking to win them as well, so we have to continue our form."

Chelsea's weekend opponents, QPR, juxtapose the Blues' end-of-season position and find themselves only a point clear of the relegation places.

After a win against Tottenham Hotspur last time out, QPR will come into the game in jubilant spirits that could dent Chelsea's charge for the top four.