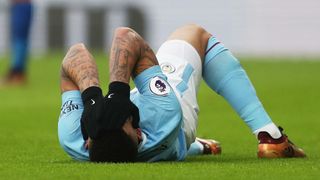 Gabriel Jesus suffered an injury to his medial collateral ligament in Sunday's 0-0 draw with Crystal Palace, Manchester City have confirmed.

The Brazil international was forced off in the first half at Selhurst Park after appearing to overstretch while accidentally doing the splits.

Although he did not need the assistance of a stretcher, Jesus left the pitch in tears and City boss Pep Guardiola predicted after the match that the forward would likely be out for up to two months.

City have now confirmed Jesus did suffer ligament damage during the incident.

However, they did not reveal the full extent of the problem or a timescale for his return, simply wishing Jesus well in his recovery as he prepares for further examinations in the coming days.

Should Guardiola's expectation of a two-month absence prove accurate, Jesus will miss a host of games but could potentially make his comeback in the second leg of City's Champions League last-16 clash with Basel on March 7.

His injury could ultimately force City into bringing in January reinforcements, with another move for Arsenal's Alexis Sanchez mooted.