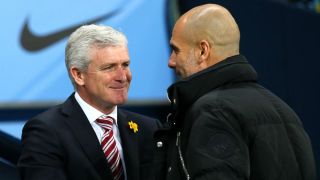 Manchester City must add European trophies to sustained domestic dominance before they can be considered among world football's elite.

That is the view of former City boss Mark Hughes, whose Southampton side host Pep Guardiola's champions on the final day of the Premier League season.

City have broken records en route to the title this term and head into Sunday's match with 105 goals and one win shy of reaching a century of points.

But their Champions League campaign was ended by Liverpool at the quarter-final stage and Hughes feels they are still some way short of the sport's super powers, including rivals United.

"It is still early days for them in terms of their standing in European and world football," said the Welshman, whose side are practically assured of safety.

"The name of Man City does not resonate like the Real Madrids, Barcelonas and Man Uniteds of this world, yet.

"I say 'yet' because if they continue in the same vein and have the resources to go into the market like they have done in recent times, then clearly they will become a huge power in world football.

"But it takes time and it is only the early stages."

Hughes was at the City helm from mid-2008 until December 2009, with his successor Roberto Mancini going on to win the club's first Premier League crown.

Since then they have become firmly entrenched as one of the division's leading lights, but Hughes insists they have to win silverware at home and abroad in order to be elevated to greatness.

"When I ­became manager of Man City they were just a mid-table Premier League team. What is that, eight years ago?" added Hughes, who won two top-flight titles with United.

"They have come a huge distance in a short space of time, so you can't start saying they are the best there has ever been ­because you need to do it over a longer period.

"They have the potential and ­resources to be able to affect the top end of the ­Premier League and European trophies for 10, 15 years.

"And they could well become the team of this generation, like United and Liverpool before and Chelsea and Arsenal in between. It is up to everybody else to try to stop that."