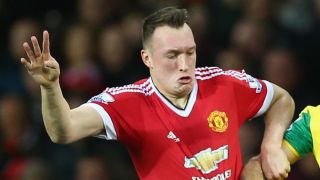 Louis van Gaal's men have failed to win in six league matches and drew 0-0 at home to Chelsea last time out.

Those results have left United sixth in the table and nine points behind joint-leaders Arsenal and Leicester City ahead of Saturday's home match against Swansea City, but Jones insists they can still finish top of the pile.

"It is strange but the table shows that literally anyone can win the league this season," the 23-year-old said to MUTV.

"Arsenal, Chelsea, Leicester, [Manchester] City, ourselves, Tottenham, Stoke, Watford - nobody seems to want to win it.

"It only takes a good run of five, six, seven games and getting a few wins and it soon turns around.

"We are disappointed with the way we have played over the past few games, although we did well against Chelsea, but by no means are we out of [the title race].

"If we can put a few wins together we will be right back up there."