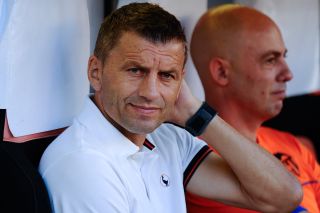 Djukic's men won just one of their first five games in all competitions this season, including consecutive defeats against Espanyol, Barcelona, Real Betis and Swansea City.

However, the 2-0 victory over the Russian side on Thursday was their fourth in a row in all competitions and Djukic believes Valencia can continue to improve.

"The team is becoming more solid together and have acquired a defensive fortitude that is very important for the team’s growth," he said.

Late goals from Paco Alcacer and Sofiane Feghouli secured the points at the Stadion Kuban as Valencia moved third in Group A.

While Valencia's season has been soured by reported tensions between Djukic and defender Adil Rami, the Serb was pleased with his team's work ethic.

"It is not easy to win here, against a team that defends well with many people, but the team has pressed and has worked well and I am happy for the effort of the team," he continued.

"On the offensive side we played well, but we have not found many chances because they had a lot of people behind the ball."