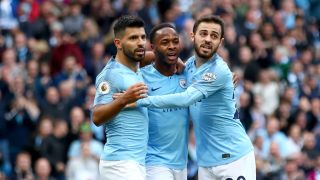 Manchester City maintained the unbeaten start to their Premier League title defence as Raheem Sterling and Sergio Aguero sealed a 2-0 win over Brighton and Hove Albion.

Pep Guardiola's men had to be patient before Sterling claimed his fourth goal of the season shortly before the half hour.

Brighton's defensive work became increasingly last-ditch from that point and Aguero found the goal his endeavours merited in the 65th minute.

The result lifted City back to the top of the table ahead of the crunch clash between Chelsea and Liverpool at Stamford Bridge later on Saturday.

Leroy Sane was the most consistent threat during a largely listless opening from the champions and it was no surprise to see him to the fore when they broke through.

Aguero drove City forward on the counter-attack and released the jet-heeled Germany winger, whose cross was slid home by Sterling.

Brighton goalkeeper Mat Ryan denied Sterling and Fernandinho before the break as City moved through the gears.

Kyle Walker sent a shot skidding wide from a similar distance to the one he scored from against Newcastle United last month and Sane misjudged a header from Bernardo Silva's excellent floated cross.

But there was no stopping City when Aguero barrelled through the midfield and skipped past Dunk's tired challenge. The Argentina striker slid in Sterling, who selflessly supplied a return pass for a tap in.

Fernandinho misjudged a header from a Brighton corner five minutes from time, with the ball striking his arm, but penalty appeals were waved away by referee Lee Mason.