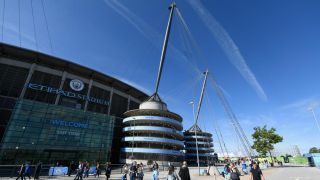 Manchester City will not face FIFA disciplinary action over the signing of youngster Benjamin Garre, football's governing body has confirmed.

City were reported to FIFA over the signing of the 16-year-old, who joined the club's academy system in July, after turning down interest from Manchester United and Barcelona.

His former club, Velez Sarsfield, claimed that City's approach for the player - when he was 15 - breached FIFA regulations that govern the transfer of minors under the age of 18.

However, after analysing the complaint raised by Velez, FIFA has decided that no rules were broken.

"We can confirm that a decision regarding the application made by the Football Association to the sub-committee of the Players' Status Committee for approval of the international transfer of the player from Velez Sarsfield to Manchester City was passed by the Sub-Committee on August 24, 2016," said a FIFA spokesperson.

"We can also confirm that after having thoroughly analyzed the request lodged by Velez Sarsfield, it was considered that there is no element justifying the opening of disciplinary proceedings against Manchester City."

Under FIFA rules, an international transfer can only be completed if the player in question is over 18, though there is an exception that allows youngsters of 16 or over to move within the European Union.

It is reported that, because Garre holds an Italian passport, he was free to sign for City upon his 16th birthday, given that the United Kingdom has yet to invoke the government act that will see them leave the EU.

The matter could yet be taken to the Court of Arbitration for Sport, however, with Velez president Raul Gamez suggesting they could pursue such a course of action in order to protect Garre's welfare.

"Never have I experienced such an immoral act," he was quoted as saying this week. "They offered money to take a 15-year-old child who is in the middle of his stage of development. We don't know what they offered the father and child in order to convince them.

"We are interested in protecting the child we have been educating since he was 11 and therefore, if necessary, we will appeal to the Court of Arbitration for Sport."