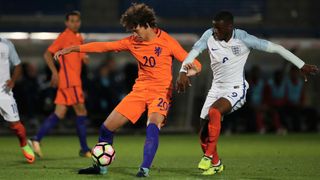 Manchester City have announced the signing of defender Philippe Sandler from PEC Zwolle.

The Netherlands youth international has joined the Premier League champions for a fee reportedly in the region of £2.5million.

The 21-year-old, a product of Ajax's famous youth system, is expected to provide cover for Vincent Kompany, John Stones, Nicolas Otamendi and Aymeric Laporte at centre-back, although he can also play in midfield.

Speaking in March ahead of his impending move, Sandler said: "I heard that scouts from Manchester City were watching me, but you do not expect as a player to go from PEC Zwolle to City.

City are delighted to confirm the signing of Dutch defender Philippe Sandler. July 31, 2018

"The best manager in the world, Pep Guardiola, is currently in charge there, and he can teach me a lot, and also the style in which they play football attracts me a lot."