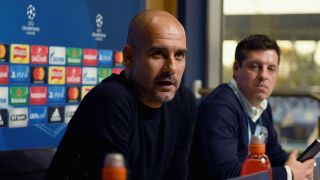 Manchester City's collapse last season should act as a warning against any complacency in the ranks of the Premier League leaders, according to coach Pep Guardiola.

City head to West Brom on Saturday with a healthy five-point advantage at the top of the table, as nearest challengers Manchester United and Tottenham face each other earlier in the day at Old Trafford.

West Brom boss Tony Pulis hailed his undefeated opponents as the best team in Europe on Friday but Guardiola heard similar plaudits when City won their first 10 games under his stewardship last season.

That form fell away, as he finished a campaign without a trophy for the first time in his coaching career and become embroiled in a scrap for Champions League qualification.

Although improvements in performance levels from City are relatively clear from 12 months ago, Guardiola believes the fact that Championship leaders Wolves held his men to a 0-0 draw in the EFL Cup on Tuesday before they prevailed on penalties served as a useful warning.

"We started the same way last season as this season. The same questions as in this period were happening last season," he told a pre-match news conference.

"We are just in October. We realised in the last two or three games how difficult it is winning games. We will just be calm and focus on what we have to do.

"We have good results, we go game by game. We will analyse at the end of the season. We are okay but it was the same last season.

"In this period we were first or second, quite similar. Okay, less points but all the comments were good in that period."

Asked whether he was considering the prospect of City completing a season unbeaten, Guardiola gave his inquisitor short shrift.

"I answered that in my last press conference," he said.

One feat of unbeaten longevity Guardiola was more willing to entertain was Gabriel Jesus' individual streak.

The striker will bring up one year without losing a competitive game if City avoid defeat at The Hawthorns.

"One year unbeaten is a lot of time, a lot of games – not just here but with Palmeiras and Brazil," Jesus' manager exclaimed. "So, wow, what a record. Amazing."

City have compiled their dominant run largely without captain Vincent Kompany but the influential centre-back is closing in on a return from his latest calf injury following a visit to see specialist Dr Ramon Cugat in Barcelona.