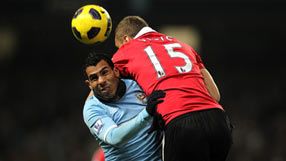 Derided by United manager Sir Alex Ferguson as "noisy neighbours", City failed to impose themselves on the 18-times champions but they were spared the agony of last season when they lost both league meetings to last-gasp goals.

While City and United huffed and puffed to little effect, champions Chelsea stole a march on their title rivals as Essien's first-half goal proved enough to beat Fulham, although the Ghanaian blotted his copybook when he was sent off late on for a lunge at Clint Dempsey.

Essien was unmarked on the half hour to head in Salomon Kalou's cross but Chelsea, beaten 2-0 at Liverpool on Sunday, were slapdash in front of goal and failed to kill off their west London rivals who have not won at Stamford Bridge since 1964.

Chelsea have 28 points from 12 games with United on 24 and Arsenal, for whom Marouane Chamakh scored both goals in a 2-0 win at struggling Wolverhampton Wanderers, third on 23. City complete the top four on 21.

Andy Carroll struck again for fifth-placed Newcastle United to boost his chances of an England call-up but his side slipped to a 2-1 home defeat by Blackburn Rovers.

Fernando Torres made it three goals in two games for Liverpool but his classy first-half strike only earned a 1-1 draw at Wigan Athletic. Blackpool went down 3-2 at Aston Villa and Everton equalised late in a 1-1 draw with Bolton Wanderers.

United remained the only Premier League side unbeaten this season but Ferguson appeared rather subdued by the loss of two points in his 34th Manchester derby.

"Credit to them, they set their stall out to be difficult to break down," Ferguson told Sky Sports.

"Maybe there was too much tension. We needed to make chances and we needed to win the match but in that sense we only had two openings and that's a bit disappointing.

"They are always going to be difficult to beat on their own ground but we don't go away targeting draws."

Chances were few and far between as much of the action was confined to the overcrowded middle third of the pitch.

The creative talents on either side found themselves marginalised with United striker Dimitar Berbatov hardly seeing sight of goal while City's Carlos Tevez was only a little more effective trying to puncture United's rearguard.

Tevez did force one flying save by Edwin van der Sar before halftime with a curling free-kick and United full-back Patrice Evra tested Joe Hart with a firm shot after one of the few fluent passing moves.

Berbatov's only effort on goal came after the break with an overhead kick comfortably dealt with by Hart.

Despite the lack of chances and excitement the closing minutes were tense for both sets of fans and the away contingent breathed a sigh of relief when City's Pablo Zabaleta wafted one presentable chance over the bar.

"A point is better than last year! Maybe we played better last season, but we lost," Mancini said. "This time it was not a fantastic game but in the end it is a good point.

"We suffered in the last three minutes, but only because of what happened last time."