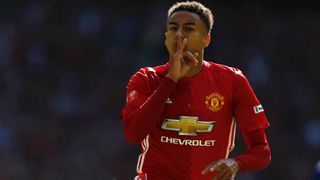 Jesse Lingard remains optimistic about Manchester United's title chances and believes they have every chance of challenging for top honours if they can maintain their promising form.

Jose Mourinho's men are trailing leaders Chelsea by 13 points following an indifferent start to the season and the Portuguese admitted this week they are unlikely to catch the Londoners.

United have been on a good run of late, though, winning their last three Premier League games, and Lingard refuses to throw in the towel just yet.

"If the lads stick together and win the games we should be winning then I do not see why we cannot be in a good position in May and challenging for the title," the 24-year-old told the club's official website.

"We have found our match rhythm now. A lot of players are playing their part and helping us win games.

"I think the defence has been very good for us, particularly over the last three or four games.

"We need to keep that going over the Christmas period and if we can do that it will put us in a good place in January."