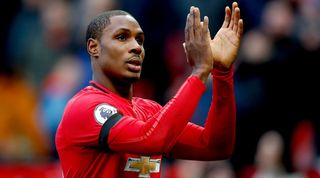 Odion Ighalo has declared his love for the Watford fans after facing his former club with Manchester United.

The travelling fans at Old Trafford sang Ighalo's name as United ran out 3-0 winners in the Premier League.

The striker scored 40 goals in 100 matches for the Hornets before leaving for Changchun Yatai in 2017. Ighalo later moved to fellow Chinese Super League side Shanghai Shenhua before joining Man United on loan in January.

The 30-year-old made his home debut at the weekend and almost scored late on.

"It's always special to hear the Watford fans sing your name because they know what I've done for them in the past when I was there," Ighalo told the Watford Observer.

"They are always in my heart and I love them for that.