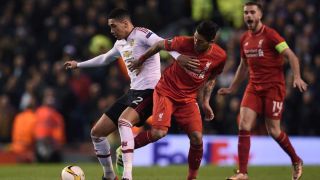 Chris Smalling expects a response from Manchester United when they host Liverpool in the Europa League last-16 second leg on Thursday.

Louis van Gaal's side suffered a humbling 2-0 defeat at Anfield last week and had goalkeeper David de Gea to thank for keeping them in the tie as the home side threatened to run riot.

United came close to another major setback on Sunday in the FA Cup quarter-final against West Ham, but Anthony Martial struck late on to force a replay.

Van Gaal had enjoyed a perfect record against Liverpool prior to the first-leg defeat and United's form at home to their fierce rivals is strong in recent years - they have won 12 of the last 14 at Old Trafford, scoring in all but one of those games.

And with a Manchester derby to come at the weekend, Smalling has little doubt that his side will raise their game again for what could prove to be a pivotal week in their season - and in the future of their manager.

"It was very doom and gloom but we didn't have a lot of time to dwell on our mistakes at Anfield," he said. "It was about getting our heads right very quickly and now we turn out attention back to Liverpool.

"We've got two massive games now and, more often than not, we turn up in those big games."

By contrast, Liverpool are enjoying one of their most productive spells under Jurgen Klopp, having responded superbly to their League Cup final defeat to Manchester City.

Premier League wins over Manuel Pellegrini's side and Crystal Palace preceded the triumph over United, and the squad will have had a full week of rest heading into the second leg.

Liverpool know that a goal at Old Trafford will leave United needing to score at least four to go through, and Emre Can has called for plenty of attacking endeavour in order to secure their quarter-final place.

"We have to keep going like in the first game," he told the club's website. "We have to press and we have to play to win the game.

"Of course, we have to try and score again. We don't want to defend for 90 minutes.

"We want to go to the quarter-final, we want to win this competition. We have played a lot of games in it already. It is very important to us."

United remain without Wayne Rooney (knee) but could see Bastian Schweinsteiger fit to start after his substitute appearance against West Ham, while Antonio Valencia is vying to be in the squad and Juan Mata returns from a domestic ban.

Martin Skrtel is eager to be involved after appearing for Liverpool's Under-21 side following a muscle complaint, but Lucas Leiva (thigh) remains sidelined.

Key Opta stats:
- Daniel Sturridge has scored five times and assisted another goal in his last seven games against Manchester United in all competitions.
- United last turned around a 2-0 deficit after a first leg away tie in the 2013-14 season, beating Olympiacos 3-0 at Old Trafford in the Champions League last-16 return leg.
- Liverpool have not lost in European competition since February 2015 (W4 D5).
- Juan Mata has been involved in eight goals in his last nine games against Liverpool in all competitions (three goals and five assists).