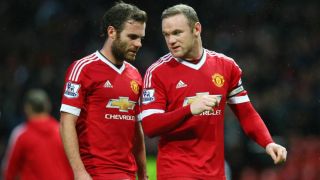 Juan Mata has warned Manchester United not to forget the lessons from their 3-3 draw with Newcastle United when they take on Southampton at Old Trafford.

With three wins in their last four games in all competitions - including a 1-0 Premier League victory at Liverpool last Sunday - Louis van Gaal has alleviated some of the pressure on his shoulders and put United firmly back in the chase for the top four, now sitting only seven points behind leaders Arsenal.

Mata says the win at Anfield will give the squad a lift but insists they must not allow a repeat of the draw against Steve McClaren's side, in which they allowed 2-0 and 3-2 leads to slip away.

"I hope this win [against Liverpool] will give us a boost of confidence and help us play better and keep getting results in order to move up the table. There's a long way to go and there is no team who is showing a great consistency, so everything is still open…," he wrote in his blog this week.

"I don't want to forget about last Tuesday. To be honest, my feeling is that we dropped two points.

"After being 0-2 and then 2-3 in the score we should have closed the game, but it wasn't the case and we were all very upset on the way back to Manchester, that's inevitable… We must learn from this kind of game."

Mata was on target in United's 3-2 victory over Southampton in September - a seventh win in the last 10 league meetings between the sides - but Saints ended a run of 27 winless years at Old Trafford last January as Dusan Tadic scored the only goal of the game.

That result gives manager Ronald Koeman plenty of hope of ending their recent run of four consecutive away league defeats, but he admits his players will need to deliver a "perfect" performance.

"We can't make stupid mistakes, because they are quality players, a quality team, they will punish you for those kind of mistakes and we need a perfect game to win on Saturday," he said to the club's official website.

Koeman has confirmed new signing Charlie Austin could make his debut for Southampton on Saturday, with Jay Rodriguez (ankle) out and Graziano Pelle still short of full fitness.

Bastian Schweinsteiger (knee) and Phil Jones (ankle) are doubts for the home side, along with Ashley Young, who picked up a knock against Liverpool. Marcos Rojo (shoulder), Antonio Valencia (ankle), Luke Shaw (leg) and Michael Carrick (knock) are expected to be out but Adnan Januzaj could return to first-team action for the first time since moving back from Borussia Dortmund, after he scored twice for the Under-21 side this week.