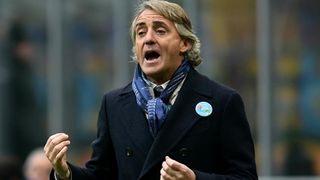 Roberto Mancini has defended himself against claims he used a homophobic slur against an Italian journalist.

The Inter coach has been in the headlines this week after he claimed Napoli counterpart Maurizio Sarri used homophobic comments against him during their Coppa Italia tie.

Sarri was handed a two-game touchline ban for his actions on Thursday.

However, Gazzetta dello Sport have accused Mancini of using similar language towards journalist Alessio Da Ronch in 2001, prompting the Italian to reply via his official website.

"What I said after the game in Naples is simply in line with my history and my footballing culture," Mancini wrote.

"I don’t ask people to share my way of being in football, but I demand respect. At the moment they’re creating a polemic and creating factions which shift attention away from the real problem!

"This story has been subject to a lot of manipulations, not least that I used that same insult toward a journalist, which is not true.

"I’ve never used that term because it’s not part of my vocabulary.

"I reiterate my disappointment, but I’d like to get back to concentrating on our sporting goals now, and the next game [against Carpi] which is crucial for Inter’s season."