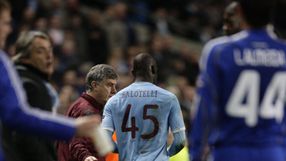 The 20-year-old Italian received his marching orders for a high-footed lunge which caught Goran Popov on the thigh in the 36th minute of the last 16, second leg tie.

The score was 0-0 at the time with City needing to overturn a 2-0 deficit from the first match in Kiev. They won 1-0 on the night but went out of the competition on aggregate.

"I'm frustrated for the other 10 players... I hope (Mario is frustrated) because I think that with 11 players we would have won this game and gone to the quarter-final," said Mancini.

Asked what he thought of the sending off, he told ESPN: "I don't know because from the bench I didn't see it very well. I think the other 10 played a fantastic game for 60 minutes."

City won the match courtesy of an Aleksandar Kolarov goal three minutes after Balotelli's red card but they failed to find the second goal that would have taken the tie into extra time.

Asked what he said to his players afterwards, Mancini added: "Only congratulations because they played a fantastic game, because they tried until the last second to score another goal because we didn't conceded anything.

"I am disappointed with the result because we deserved to score another goal minimum because we played a fantastic game with 10 players."

City defender Vincent Kompany said Balotelli's sending off left the team with a tough task against the Ukrainians but refused to blame their exit on the incident.

"It's difficult for me to comment on the action because I've not seen it but, regardless of who it was, you go down to 10 men then it is a difficult game.

Balotelli was forced off the pitch in the first leg having come out late for the second half rubbing his eyes and British media said he had been suffering from a grass allergy.

The Italy international, whose season has been disrupted by injury and suspension, has now been sent off twice since signing for big-spending City from Inter Milan in August.