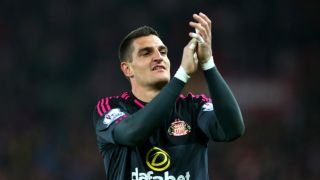 Vito Mannone has signed a new contract with Sunderland that will keep him at the Stadium of Light until June 2018.

The goalkeeper's previous deal was due to expire at the end of the upcoming campaign, but he has now agreed a one-year extension.

Mannone started his professional career at Arsenal and also enjoyed loan spells with Barnsley and Hull City before joining Sunderland in July 2013.

The 28-year-old has since made 69 appearances in all competitions for the club, leading his team to the final of the League Cup in 2014 with two penalty saves in a semi-final shootout against Manchester United.

Mannone is the third player to sign a new contract with Sunderland in recent weeks, with Jermain Defoe and Patrick van Aanholt previously inking new deals.