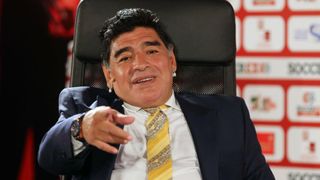 Diego Maradona is desperate to return to coaching and has set his sights on a second spell as Argentina manager, suggesting he would even take the job without getting paid.

The 55-year-old previously coached the national team between 2008 and 2010, with Argentina's 4-0 defeat at the hands of Germany in the quarter-finals of the 2010 World Cup signalling the end of his spell in charge.

He then had a spell as Al Wasl boss in 2011, but has not worked in a coaching capacity since being sacked in July 2012.

However, Argentina are on the lookout for a new coach after Gerardo Martino resigned the post following the penalty shootout defeat at the hands of Chile in the 2016 Copa America final.

And Maradona, who won the World Cup with Argentina in 1986, is hopeful he will be considered for the job.

"[Diego] Simeone was not interested in the job for financial reasons. Money is not an issue for me," Maradona told Fox Sports.

"I would coach the national team for free.

"A lot of people seem to think I am an expensive coach. But what about Mourinho? And Ancelotti or Simeone? I don't know how expensive I am compared to these coaches.

"I am starting to miss coaching more and more. I miss working with the players and fighting with the journalists."

Argentina will be coached by caretaker boss Julio Olarticoechea during the 2016 Olympics in Rio.