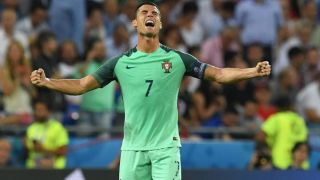 Ronaldo and Co. face the tournament hosts in Paris on Sunday, with Portugal looking to win their first major trophy.

Fernando Santos' men, who have had Ronaldo score three times at the tournament, have been criticised for their style of play in reaching the decider.

However, football great Maradona feels Portugal are capable of causing an upset – if Ronaldo wants it enough.

"It's not all about strategy in big games. Wanting something badly is big motivation," he wrote in The Times of India.

"Playing a second final at 31, Ronaldo won't get a better chance at international glory.

"How badly he wants it could determine the distance between France and yet another successful home run."

While Ronaldo has done enough for Portugal, Antoine Griezmann has been the star of Euro 2016 with six goals.

Maradona said Santos' side needed to be careful when facing the Atletico Madrid forward.

He wrote: "Like France thinking of containing CR7, Portugal will be wary of AG7. Griezmann has a lovely touch, a sublime left foot, and his six goals have lit up the tournament.

"They carry the confidence of dumping Germany, while Portugal have had an additional day of rest, with time to think about the blue wave about to test their defence."

Maradona also praised Paul Pogba and feels the Juventus midfielder is nearing his best form heading into the final.

"They have resources in midfield and attack to put Portugal under pressure," the 1986 Argentina World Cup winner wrote.

"Pogba is peaking at the right time. The trick he displayed before chipping the ball in for the second goal [against Germany] was about amazing skills, other than confidence.

"[Blaise] Matuidi and [Moussa] Sissoko are the spoilers in midfield, where [Dimitri] Payet will have a more attacking role, after having fallen back deeper in the semi-final.

"France's strength lies in this department, that harries the opponent as well takes the game forward."