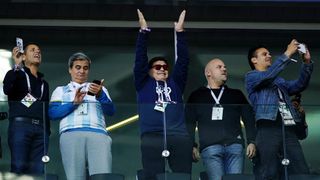 Argentina legend Diego Maradona was at Spartak Stadium on Saturday to watch his country's World Cup opener against Iceland.

Regarded as one of the greatest players in history, and the inspiration behind Argentina's 1986 title success, Maradona made a characteristically enthusiastic entrance after appearing on a balcony overlooking the pitch just minutes before kick-off.

After being serenaded with chants about being "better than Pele" by the Argentina fans, Maradona conducted the orchestra before taking his seat.

Maradona watched on as Argentina claimed an early lead in Moscow, only for Iceland to restore parity at half time through Alfred Finnbogason.