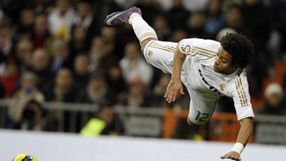 The Brazilian Football Federation said in a separate statement they estimated the player would be out of action for around three months.

Marcelo picked up the injury while training with Brazil in the Polish city of Wroclaw ahead of Tuesday's friendly against Japan.

He will return to Madrid immediately where a decision would be taken on the treatment required, Real said.

Losing Marcelo comes as a double blow to Real coach Jose Mourinho with his other left-back Fabio Coentrao also returning to the Spanish capital after picking up a muscle injury while on duty with Portugal.

Coentrao had to be substituted in the first half of Friday's 1-0 World Cup qualifying defeat in Russia and has been ruled out of Tuesday's visit of Northern Ireland, Real said.