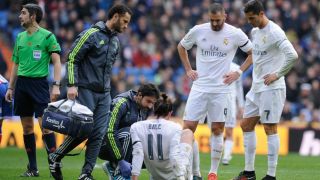 Bale, who opened the scoring in a 5-1 La Liga win at the Santiago Bernabeu on Sunday, was forced off at half-time after picking up a problem with his right calf muscle, while Benzema appeared to take an accidental kick to the ankle from team-mate James Rodriguez.

Both forwards were able to walk off the pitch and Marcelo hopes their withdrawals were nothing more than precautions on the part of head coach Zinedine Zidane.

"Hopefully Bale and Benzema's injuries are nothing," he was quoted as saying by AS.

Madrid were 5-0 up at half-time after a rampant display, and Marcelo believes the players are already beginning to play the kind of football Zidane craves just two matches into his tenure.

"We're very clear in what we want and what the boss asks of us, which is to play in the opposition's half, get the ball back quickly and go on the attack.

"It's a great result but we've worked a lot and worked well, because Sporting are a difficult team.

"The players feel happy when we win. But it's true we're satisfied. The idea is to get better so we can win another title this season."

Madrid are away to Real Betis in La Liga next Sunday.