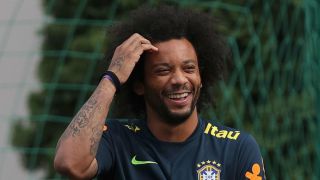 Marcelo appears set to start for Brazil against Mexico after the Real Madrid defender took part in training for the Selecao in Samara on Sunday.

The left-back lasted just 10 minutes of Brazil's 2-0 Group E win over Serbia on Wednesday, when he was forced off with back spasms and replaced by Filipe Luis.

Team doctor Rodrigo Lasmar suggested a hotel mattress may have been the cause of the issue, but remained optimistic that Marcelo would recover in time to face Group F runners-up Mexico in the last 16 on Monday.

And those positive predictions were borne out as Marcelo joined the rest of his team-mates in practice on the pitch at Samara Arena.

Brazil only arrived in the city in the early hours of Sunday morning, when they were met by a throng of reporters and a large crowd of vociferous supporters at their hotel.

The five-time champions are aiming to reach the World Cup quarter-finals for the seventh time in a row, while their opponents are looking to rid themselves of "the curse of the fifth game", after falling at the second-round stage in each of the past six tournaments.