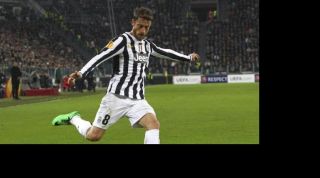 Antonio Conte's side visit Estadio da Luz for the first-leg clash against a side that was crowned Portuguese champions for the 33rd time at the weekend.

Benfica have considerable pedigree in the Europa League having lost the 2013 final 2-1 to Chelsea and reached the semi-finals three times in the last four seasons.

However, with the 2014 showpiece being held at Juventus' home stadium in Turin, the Serie A leaders will have extra motivation to overcome Benfica and progress.

But, while the prospect of a home final has acted an extra incentive to Juve, midfielder Marchisio is wary of the threat posed by Jorge Jesus' team.

"We knew this right from the start when we began in the group stage of the Champions League," Marchisio told UEFA.com.

"When we didn't qualify and moved into the knockout phase of the Europa League, the fact that the final would be at home clearly gave us an added boost.

"We'll come up against a side that in recent years, not only in their own league but in competitions like the Europa League, have done really well, even if they have lost some finals.

"Clearly they have the experience and the players with the qualities and characteristics to cause us difficulty. We have to think about them and think of the game as another final.

"There will be two quality teams that will try and put on a spectacle in these two matches. For our part, we hope we have the right belief to reach our objective, which is to play the final in Turin."