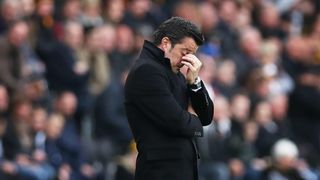 Marco Silva has been sacked by Watford after a "significant deterioration" in the wake of Everton's attempts to lure him away from the club in November.

The Portuguese was among the Toffees' primary targets after they dismissed Ronald Koeman, with the 40-year-old having presided over an excellent start to the season following his move from Hull City in May.

But Watford rebuffed the Goodison Park club's approaches, as the Merseysiders refused to pay the reported £20million fee demanded in order to release Silva from his contract.

Silva was non-committal throughout the saga, with some perceiving that to mean he was unhappy with Watford's refusal to let him discuss terms with Everton.

Everton subsequently turned to 63-year-old Sam Allardyce, who bristled at the suggestion he had been second choice to Silva, claiming the younger coach's record had "no comparison whatsoever with mine" on account of him being relegated with Hull last season.

Silva defiantly bit back, telling reporters to "go and see what he [Allardyce] was doing when he was 40".

But Watford believe the saga has had a lasting impact, evidenced by a run of one win in 11 Premier League games.

"This has been a difficult decision and one not taken lightly," read a club statement. "The club is convinced the appointment of Silva was the right one and had it not been for the unwarranted approach by a Premier League rival for his services we would have continued to prosper under his leadership.

"The catalyst for this decision is that unwarranted approach, something which the board believes has seen a significant deterioration in both focus and results to the point where the long-term future of Watford FC has been jeopardised.

"For the security and success of the football club, the board believes it has to make a change.

"The club will seek to make a swift appointment and there will be no further comment until that appointment has been made."

Saturday's 2-0 defeat at Leicester City left Watford in 10th, but only five points above 18th-placed Southampton, who play their game in hand on Sunday.